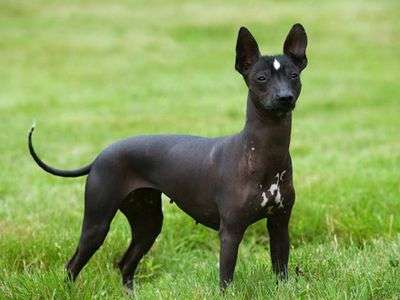 The Xoloitzcuintle, or Xolo, is more commonly known as the Mexican Hairless Dog. For those who want to take a crack at the pronunciation, it sounds like: " show low eats queent lee."

Native to Mexico, the Xolo is thought to have existed for at least 3000 years. The Aztecs and the Mayans, among others, considered them sacred, believing that they were necessary to help the souls of their masters navigate the netherworld. They were also used as companion dogs, and some cultures, the Aztecs in particular, used them for meat, consuming huge quantities of them during feasts.
When Christopher Columbus travelled to the Caribbean, he made note of seeing strange hairless dogs on the islands, which eventually resulted in them being transported to Europe. For hundreds of years, the Xolo existed in its native Mexico, but there was little interest in cultivating the breed. By the early fifties, it was in danger of becoming extinct, and a group of dog experts undertook an expedition to track down the remaining purebreds. Ten healthy specimens were found, and these became the foundation of the breed that now exists. On May 1, 1956, the Xolo was finally recognised in its own country.

The Xolo has been described as having a "primitive" temperament, meaning they have strong hunting and pack instincts, as well as a high level of intelligence. Breeding programs in Mexico have taken measures to ensure that this temperament has not seen any drastic changes, and it remains a naturally strong and healthy dog. Once grown to adulthood, at about two years, they have a calm disposition, although puppies can be boisterous. As in all breeds, temperament varies, and some Xolos are more naturally agressive and inclined to pick fights. If not properly socialised and exercised, they can develop a proclivity for escaping. This is a very social breed, and does best when it has other canine companions, although they do also develop a strong attachment to their humans. While they surely need exercise and stimulation, this is not a dog who likes to live outdoors, due mostly to its physical constitution; also, their mental makeup does not lend itself to isolation.

This breed has been developed into 3 distinct sizes: toy, which ranges in height from 10 - 14 inches, and weighs between 9 - 18 pounds; miniature, which stands 14 - 18 inches in height and weighs in between 13 and 22 pounds, and the standard, which has a height range from 18 - 23 inches and weighs from 20 to 31 pounds. The body should be streamlined and rectangular in proportion, being slightly longer in length than in height. The coat occurs in two varieties: coated and hairless. The hairless is completely smooth, although some hairs on the skull, tip of tail and the toes are commonly seen. In the coated type, the coat appears as thick, flat and short. The neck should be long, and ears are bat-like and quite large. The eyes are almond-shaped.

Because the Xolo has been selectively bred for many thousands of years, it enjoys remarkably good health, with few genetic defects, and has a good lifespan - from 12 to 15 years. It is normal for the hairless variety to be missing some teeth, but the coated should have full dentition. The skin is quite delicate and should be gently bathed once a week. Other than this, the Xolo is low-maintenance, healthwise.
An interesting fact to note: the Xolo made its first appearance at the Westminster Kennel Club Show in New York in February of 2012.