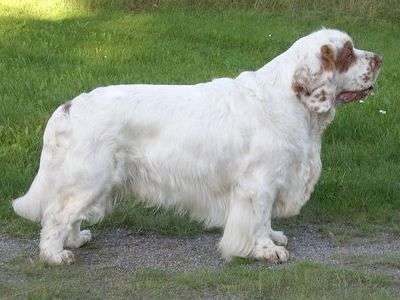 This rare breed can be rather hard to find and is prided for its gentle temperament and loving nature.

The Clumber Spaniel is descended from a number of popular breeds including the St. Bernard, the Alpine Spaniel and the Basset Hound. The Clumber Spaniel is believed to have been developed in France in the second half of the 18th century by the Duke of Noailles. The Duke transferred his dogs to England under the care of the Duke of Newcastle when he was threatened by the Revolution and the name actually comes from Clumber Park, which was the Duke of Newcastle’s estate. The first Clumber show took place in England in the 19th century and this breed has been favoured by several British monarchs including King George V. The breed arrived in Canada around the middle of the 19th century and was recognised by the American Kennel Club in 1884.

This is the heaviest of all the spaniels and this breed tends to be rather slow. The dog has short legs and its body is low to the ground, while the massive head is broad with a deep muzzle, a heavy brow and a defined stop. The breed’s large nose comes in a range of shades, while the eyes are deep set and amber. The triangular ears feature round tips, while the coat is feathered and is mainly white with orange or yellow markings.

This docile breed is very sweet and intelligent. They love to spend time as part of a family and can also interact well with other animals if they are introduced from an early age. However, it is important to train this breed thoroughly and use a firm hand so that they do not become overpowering and try to take a leadership role in the family. If training is done properly the breed can be a constant and loyal companion, especially for children, who they love to play with as much as possible.

The Clumber Spaniel likes to chew and has a tendency to shallow foreign objects, so it should be monitored fairly closely. Diet control is also needed to make sure that it does not overeat. When sleeping, the dog tends to snore, drool and wheeze, while other health concerns include cataracts, dry eyes, flea and skin allergies and hip dysplasia.

Clumber Spaniels prefer cool weather and can sleep outdoors, especially during the summer months. If the breed is kept in an apartment it tends to be rather active and will also need a garden to run around in.

Because the puppies of this breed grow very quickly they need a low of exercise, while adults tend to slow down a lot. In addition to a daily walk, Clumber Spaniels should be stimulated with games such as chasing after a ball or Frisbee, while they also love to swim. However, care should be taken to make sure that they do not overheat in the summer months. The coat requires regularly combing and brushing, while the eyes and ears need to be cleaned carefully to prevent infections. The hair under the ears should also be clipped to prevent it from becoming excessive. The coat of this breed should also be professionally trimmed once or twice a year.