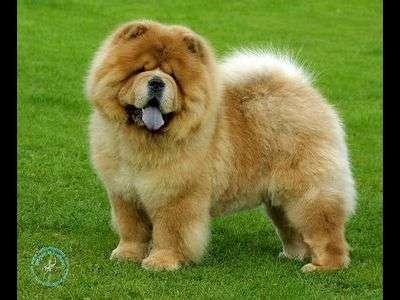 As one of the oldest dog breeds in the world, the Chow-Chow's direct ancestors lived with the nomadic tribes that populated Mongolia thousends of years ago. These dogs were originally not kept as pets, but to supply humans with fur and meat. After Chow-Chows were introduced to ancient China, people there gradually started to take advantage of their exceptional guarding instincts and also used them as sledge dogs as well as for hunting purposes. In contrast to most other breeds that originated in China, the Chow-Chow wasn’t kept by the privileged classes, but by ordinary working class people. Some Chinese emperors in the Hang Dynasty however were known for keeping lots of Chow-Chows as hunting dogs.

The origin of the breed’s name is still connected with different legends as it has not yet been scientifically verified. In its homeland China the word "chow-chow" means delicacy, but the dog is also known as the "bear dog", the "wolf dog" or the "black-tongued dog", referring to its most distinctive feature.
It took until the late 19th century when the Chow-Chow was finally introduced to Europe. Great Britain was the first European country to recognise it as a breed under the name „Pomerian dog“. Until today the Chow-Chow is quite rare in Europe and is mainly kept by experienced dog enthusiasts, who accept its rather difficult and independent nature.

The Chow-Chow is mainly known for its strong build, unique thick fur and its black tongue. Its fur consists of two types of coat that give him an impressive look. The rough outer layer is thick and stands off the dog’s body while the undercoat is soft and woolly. The fur is even thicker and longer around the dog's neck and head which makes it resemble a lion’s mane. Even the high tail is covered with thick long hair, is carried close to the back line and points against the head. The coat can appear in a varity of colours from different shades of cinammon, red, golden and cream to black and blue.
The Chow-Chow’s build is rather large and stocky with a big and broad head and small, rectangular ears. This dog can reach a shoulder height of up to 51 centimetres and weighs up to 32 kilos, the male being much heavier than the female. The eyes are very dark, almond-shaped and sit very deep in the skull.

The Chow-Chow is of a calm and generally peaceful nature and shows no aggression towards other dogs or humans. It is however very unique in its character, as it is independent, reserved and stubborn. This very intelligent and dignified breed is not one for being cuddled or fussed over. It needs its freedom and prefers a quiet home with one favourite person who it will be absolutely devoted to. It is quite adaptable though and can easily be kept in a family due to its well-balanced character. It will always passionately protect all family members and is an excellent guard dog which is suspicious of any stranger. If a Chow-Chow is raised with other pets or little children it will become used to them and accept them. Because a Chow-Chow doesn’t tolerate any abuse, it is more suitable for a family with older children who have had some experience with dogs and know how to treat them.

As the Chow-Chow is of a very dominant nature, it requires a strong-willed owner who is prepared to spend a lot of time training and socializing it from a very early age, preferably as a puppy. It can easily be kept in a house or city apartment, provided it gets daily walks. Regular exercise prevents the Chow-Chow from developing behavioral problems. The thick coat requires a lot of careful grooming and should be brushed at least three or four times a week.