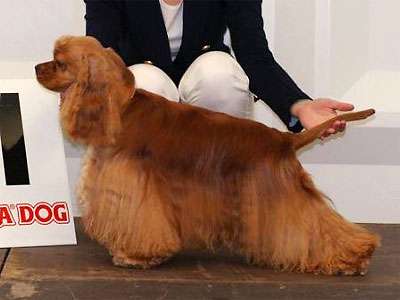 Known for its good temperament and its lively nature, the American Cocker Spaniel is very popular with dog breeders and families alike. Bred in the USA from the English Cocker Spaniel, the ACS belongs to the gun dog class, making it energetic and intelligent. It is also known for its beautiful coat, which gives a wonderful appearance but needs careful maintenance. Life expectancy is generally between 12 and 17 years.

The ACS stands at around 38cm (15½ inches) for the dog and 36.8cm (14½ inches), for the bitch, and weighs between 7 and 14 kg (15-30 lbs). It has a solid frame with the back sloping towards the tail. It has a well-rounded skull and dark forward-facing eyes as befits its status as a gun dog, together with a strong square muzzle. Its ears are long and feathered and set low on the head. Traditionally, the tail was docked, but this practice has now been banned in many parts of Europe.

However, its most striking physical characteristics is its full coat, which is long, has a beautiful sheen and may have a slight wave. Feathering is present on the chest, abdomen, and legs as well as the ears. Colouring is varied, including solid colouring, black and tan, merle and parti-colour.

Naturally, the long coat of the ACS requires careful and regular grooming to avoid knots and tangles becoming firmly embedded. The coat should be brushed thoroughly every day, and professional grooming may be recommended on an occasional basis to maintain the quality of the coat. If the dog is intended as a working dog or family pet, the coat could be trimmed to make grooming easier, but show owners of show dogs will no doubt want to keep the coat at its natural length to maximise its appearance in the ring. However, it's important to be aware that this breed sheds its hair readily.

As the ACS is a gun dog, it is bred to be lively and active, so dogs need plenty of regular exercise to keep them happy and occupied; the recommended level is over two hours each day. Dogs that are not stimulated enough, or do not get sufficient exercise, can develop negative traits such as digging in the garden or becoming aggressive through boredom.

The is ACS considered to have an excellent temperament, as it is active and energetic, but does not get over-excited easily.

As with all breeds, the ACS has known health issues, so it's essential to ensure that any dog purchased is known to be free of these, especially if it is bought for breeding purposes, to avoid perpetuating inherited conditions.

There are several eye conditions known to affect the ACS, including inherited cataracts, glaucoma, retinal dysplasia and progressive retinal atrophy. It's essential for dogs to have a regular annual eye examination, so that any problems can be identified swiftly and addressed promptly. This allows preventable progression of eye conditions to be tackled quickly and avoids unnecessary suffering to the dog.

IMHA (Immune Mediated Haemolytic Anaemia), is also known to affect this breed. This condition results in the dog's red blood cells are attacked and destroyed by its own immune system. There are two forms: primary and secondary. The primary form is seen most frequently, but the secondary form, which is triggered by an underlying cause such as an infection, is also relatively common.