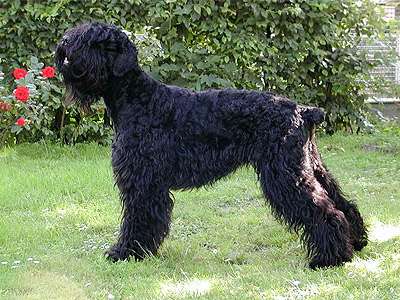 Known otherwise by the acronym BRT, the Black Russian terrier is actually not literally of the terrier breed. Rather, it shares some of the came characteristics. One of the notable facts of this animal is that it has not normally been seen (until recently) outside of its native Russia and the eastern Baltic states. It is known for its cunning, loyalty and its high levels of energy. It is for these reasons that the Black Russian Terrier was known as "Stalin's Dog" during the Cold War period. It was not until 2004 that this breed was officially recognised by the American Kennel Club.

The BRT was bred as a hunting and military dog in the former Soviet Union. It is an amalgam of many other breeds such as the Schnauzer, the Airdale Terrier, the Newfoundland and the extinct Moscow Water Dog. Breeding was only sanctioned by the government and it was not until 1957 that civilians were allowed to own this variety. Slowly, the presence of the Black Russian Terrier began to spread. With the collapse of the Soviet Union, it began to make its way into Europe and more recently, the United States.

The temperament of this breed is highly important to both law enforcement officers and individual owners. As it is not a true terrier, it lacks the willful nature that can make these breeds hard to control. On the contrary, it is quite a confident animal and it will normally respond extremely well to all forms of training. This is one of the reasons that the BRT has been used for a long time for such varied tasks as hunting out hidden drugs and pulling carts. It is excellent with children and is well behaved within a family. However, this dog is rather aloof and it may not respond amicably to nearby animals. This is the primary reason why Black Russian Terriers are best purchased when they are very young.

Due to the rather self-reliant nature of this dog, normal care is minimal. The main priority is the proper grooming of their hair (they possess a low-shedding coat). Thus, owners should brush them a few times a week (more if the animal is intended for show).

Due to the high levels of energy displayed by the Black Russian Terrier, owners should make it a habit to present the animal with physical exercise such as running and playing ball. If this does not occur, the dog may actually begin to suffer from hypertension and his or her behaviour could change over time.

A lifespan of between ten and fourteen years classifies this breed as a generally healthy and long-lived animal. However (and due in no small part to the sheer variety of other ancestral dogs), certain hereditary traits can be passed down. These can include hip dysplasia and elbow issues later in life. Notably, the Black Russian Terrier is not known to suffer from progressive retinal atrophy (PRA); a condition experienced by many other breeds. It is nonetheless important to check the breeding stock of anyone offering these animals for sale. This can help to mitigate the chances of purchasing a pet that will have problems later on in its life.

The Black Russian Terrier is indeed a unique dog and while it is not technically a terrier in the traditional sense, its outward appearance belies this fact. For those who are searching for a loyal, patient and well-behaved dog, this animal may very well be the ideal choice.